On Living in Brooklyn Heights

When Emily and I first decided to move to New York, neither of us knew where we were going to live. I think we both assumed it wouldn’t be Manhattan – it was too expensive, and I’m not sure either of us would be happy with the tiny kitchens that define the island living experience for most people with limited budgets – and would likely be in an affordable neighborhood in Brooklyn. In our first months in the city, we lived in a series of Airbnbs and sublets, our stays planned to ensure we understood the various neighborhoods of the city. We spent time in Red Hook, Prospect-Lefferts Gardens, Fort Greene (stopping to eat pizza in the park where Richard Wright wrote), Bedford-Stuyvesant, and Brooklyn Heights.

Originally, we thought we might end up in Carroll Gardens. It’s not the most affordable neighborhood, but we enjoyed walking through it when we stayed in nearby Red Hook, as it felt more like a neighborhood than some of the other areas of the city, and the biggest con mentioned in neighborhood reviews – namely, its distance from entertainment and night life – suited us just fine. We loved the quaint rows of brownstones, and we liked the number of families we saw walking around. Though we liked other neighborhoods we saw during our stays elsewhere, we had fallen in love with Carroll Gardens.

Our sublet in Brooklyn Heights was somewhat unexpected, as we thought the neighborhood would be too expensive for us. However, when we found an affordable listing in Brooklyn Heights looking to sublet on exactly the date we needed a place to stay, it seemed serendipitous, and we quickly jumped on it. We enjoyed the neighborhood more than we had originally expected we would, ultimately deciding to expand our apartment search north, though we weren’t optimistic about finding something affordable, and we still weren’t sure it was the perfect place for us.

We scheduled our first apartment viewings on a Saturday in March, opting to look at three apartments in Carroll Gardens and two in Brooklyn Heights. The Carroll Gardens viewings were mostly a bust – we saw one nice apartment, but it wasn’t perfect, and we were less than thrilled with the other two we found. We also discovered that, on closer inspection, the neighborhood might not suit us as well as we thought, as it seemed like it was rapidly becoming the refuge of Park Slope ex-pats. Though there is nothing wrong with that, we were concerned that the neighborhood might be in the midst of change – and perhaps a change that we weren’t enthusiastic about.

When we looked at the first apartment we had scheduled a viewing for in Brooklyn Heights, we fell in love almost immediately – unlike the nice but charmless walk-ups we viewed earlier in the day, the apartment was in a lovely brownstone, and the apartment itself was everything we had been looking for (we spent so much time there that we ended up missing the viewing of the second apartment in Brooklyn Heights). We moved quickly to secure it, and we signed a lease the next day, walking across the Brooklyn Bridge to Chinatown to get a cashier’s check to cover the deposit since it was a Sunday.

(I make it sound like finding an apartment was a collaborative process – Emily actually set everything up. She is excellent at finding apartments.)

That apartment itself is quite affordable, but it ended up being on Columbia Heights – a street notorious for being the most expensive place to live in the outer boroughs. I’m not sure either of us expected to end up living on a street that elicits gasps from nearly everyone we encounter in the neighborhood we give our address to. On one hand, we do wish that we lived in a neighborhood with less affluence and more diversity. On the other hand, at least we’re not contributing to gentrification, and I’m pretty sure our meager income is already causing the neighborhood association to schedule meetings about the potential consequences to property values posed by our residency.

It goes without saying that the neighborhood is quite nice. There are multiple grocery store options, and the walk to each one involves a stroll past rows of brownstones and federals rather than the trek down busy garbage-lined thoroughfares common in other neighborhoods. We’re steps away from the Brooklyn Heights Promenade, the primary amenity planned in conjunction with the BQE’s tear through the city’s quality affordable housing. And the soundscape is dominated not by honking horns and the angry outbursts of passing pedestrians (especially forceful from those in the employ of the United States Postal Service) but instead by chirping birds, shrieking children (we live near a public playground), and the various mournful notes of passing barges.

I don’t think either of us expected that we would live in a neighborhood with more pleasant walking paths than we had in Fayetteville, where we often had to walk in the street due to cracked sidewalks and regularly dodge the police cars that sped down the hill north of our old apartment. Wherever you walk, there’s always something interesting to look at, whether its a row of houses, a flowering tree, or the skyline of Manhattan. Below is a short series of photos I took of the neighborhood while out on a walk – something Emily and I do more often than we ever did in Fayetteville. Who knew it took moving to the city to enjoy the great outdoors? 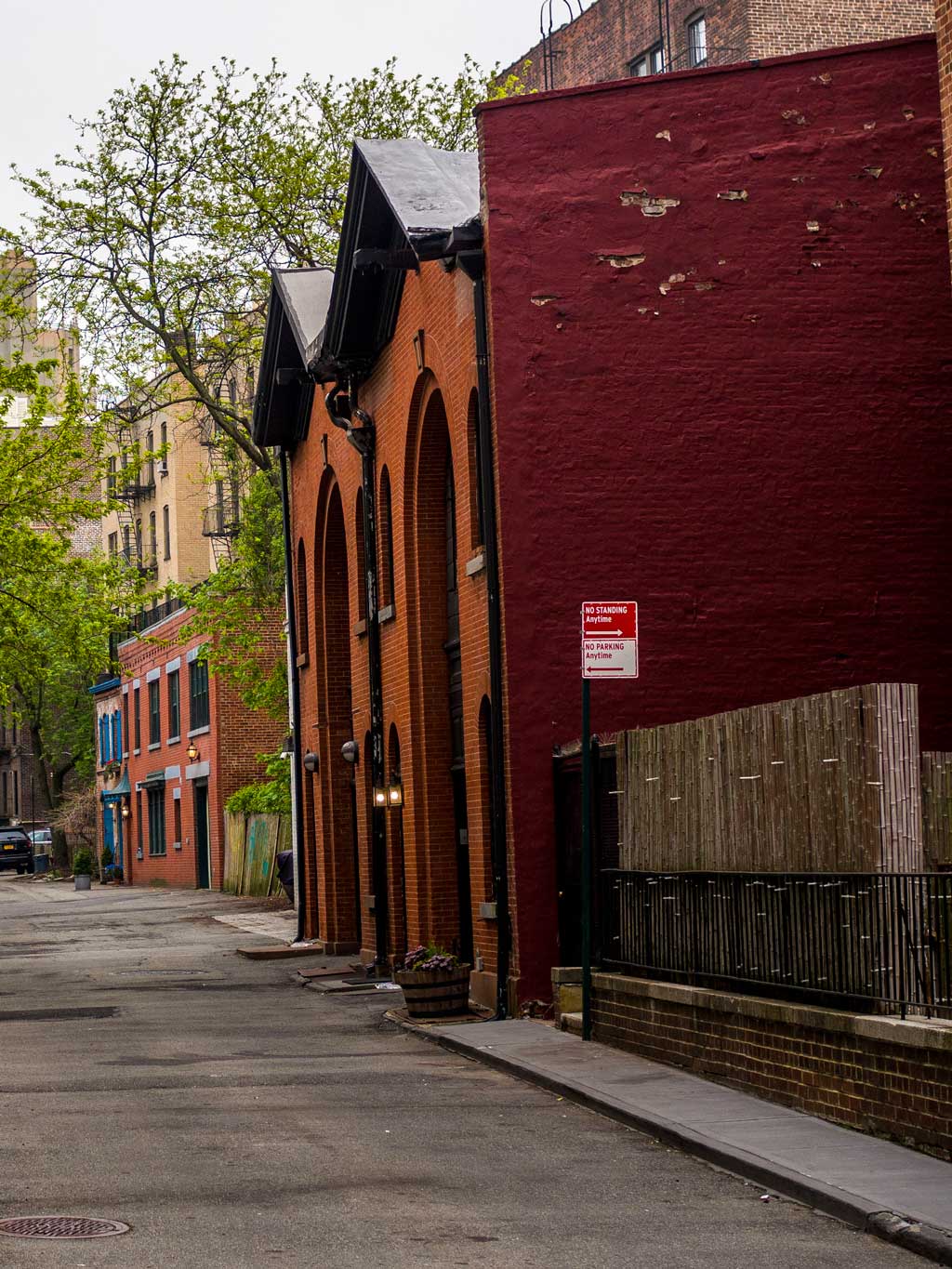